All three of these companies have carved out an easily defendable corner of the economy. You wouldn’t know it by looking at their market valuations though. Here’s why you want to jump on them before they get noticed.

Selling lab-to-market ingredients at a profit is a whole lot harder than raising money from investors excited about the burgeoning synthetic biology industry. Amyris is an established SynBio pioneer that doesn’t get much attention despite being the only company in this space quickly heading toward profitability.

In the first quarter of 2021, Amyris reported total revenue of $ 177 million. Product sales jumped 47% year over year, driven by consumer sales that rose 73% year over year. Adjusted earnings before interest, taxes, depreciation, and amortization (EBITDA) came in at $ 103 million.

The company’s most successful product to date is squalane, the key ingredient in every high-end moisturizing skincare product. Before Amyris came along and started producing squalane in giant fermentation vats, shark livers were the main source of this highly valued ingredient.

Amyris partners with customers to replace the most expensive ingredients along their supply chains with sustainable molecules produced by feeding sugar to microorganisms. Instead of waiting around for manufacturers to add more squalane to their lotions, though, the company launched the increasingly popular Biossance brand.

Squalane is the company’s biggest revenue stream at the moment, but it isn’t the only one. The company also markets the Purecane brand of zero-calorie sweetener, and will probably begin producing large quantities of a cannabinoid many times more potent than CBD later this year.

This company repackages useful drugs for eye-related conditions into tiny inserts that rest in easily accessible tear ducts. Ocular Therapeutix’s lead drug, Dextenza, is a tiny insert that releases an old steroid called dexamethasone onto the surface of the eye for 30 days.

Eye surgeons can insert Dextenza into tear ducts while performing surgical procedures where it steadily reduces inflammation for a whole month. Old fashioned dexamethasone eye drops aren’t hard to come by, but they aren’t much help while patients have their hands full.

First-quarter Dextenza sales more than tripled year over year to $ 6.7 million and they have a lot of room to climb. The company thinks annual sales of Dextenza in the post-surgical setting could reach $ 1 billion.

At the moment, the FDA’s reviewing Ocular Therapeutix’s application for the treatment of allergic conjunctivitis with Dextenza. An approval could double Dextenza’s addressable market before the end of the year. Plus, and the company’s testing five more ocular therapy candidates in clinical trials right now. 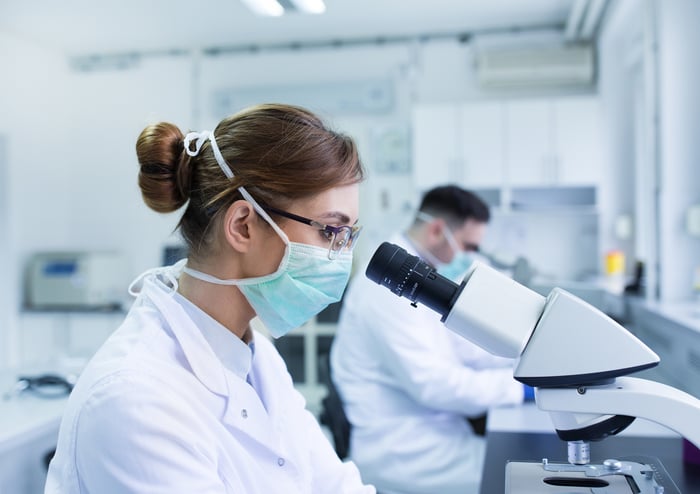 Renalytix AI is a rapidly growing diagnostics company that does a lot more than just run blood samples. The company’s KidneyIntelX platform employs a proprietary algorithm to predict progressive loss of kidney function for people with type 2 diabetes before it happens.

The vast majority of CKD spending goes toward less than 1 million patients with end-stage kidney disease who require dialysis several times per week and ultimately a hyper-expensive transplant procedure. By counting blood sample biomarkers and combining this data with information in patients’ genetic information and their health records, Renalytix AI’s service can predict kidney function decline before it happens. This allows physicians to allocate limited resources to patients most likely to become an enormous financial burden without quick intervention.

This start-up still has very little revenue to report, but its top line could explode higher before the end of the year. In April, Renalytix AI signed a 10-year contract with the US Government to provide KidneyIntelX testing services at a rate of $ 950 per reportable result. The contract applies to all branches of the military and at least 140 other agencies, departments, and affiliates.

These life science stocks are poised to provide market-beating gains over the long run, but their success isn’t guaranteed. These would make great additions to portfolios that seek aggressive growth, but they might not be a great pick for investors with a low tolerance for risk.

This article represents the opinion of the writer, who may disagree with the “official” recommendation position of a Motley Fool premium advisory service. We’re motley! Questioning an investing thesis – even one of our own – helps us all think critically about investing and make decisions that help us become smarter, happier, and richer.