Electric vehicle (EV) stocks are among the most promising investment themes for the next decade as the auto industry pivots towards a zero-emission future. However, after strong gains last year, EV stocks looked weak in 2021.

Meanwhile, after the fall, some names started to look attractive. Here are the five best EV stocks you can buy in October 2021.

Xpeng Motors stock is down 14.6% so far in 2021 and is now trading at a nearly 50% discount from the 52-week highs it reached in November 2020. During that time, after the high fall sharply, XPEV looks like a good Chinese. EV share to buy in October. Xpeng Motors delivered 10,412 electric cars in September, almost triple what it delivered in the corresponding month of last year.

As deliveries continue to increase and Xpeng Motors realizes economies of scale, margins will increase further. The company is also considering international expansion, and like China’s electric vehicle company NIO, is entering the Norwegian market.

With an EV (enterprise value) / NTM sales (next 12 months) multiple of 7.3x, XPEV appears to be an EV stock of reasonable value. As China takes global leadership in zero-emission cars, XPEV is among the best stocks of Chinese electric vehicles to buy in October.

NIO is among the most popular Chinese electric vehicle stocks. The stock lost nearly a third in 2021 and is underperforming Chinese electric vehicle stocks. In the meantime, if you’re looking to invest in a quality Chinese EV name for the long haul, NIO seems like a good bet. Last week Goldman Sachs also turned bullish on the stock, moving it from a neutral level to a buy while maintaining a target price of $ 56. 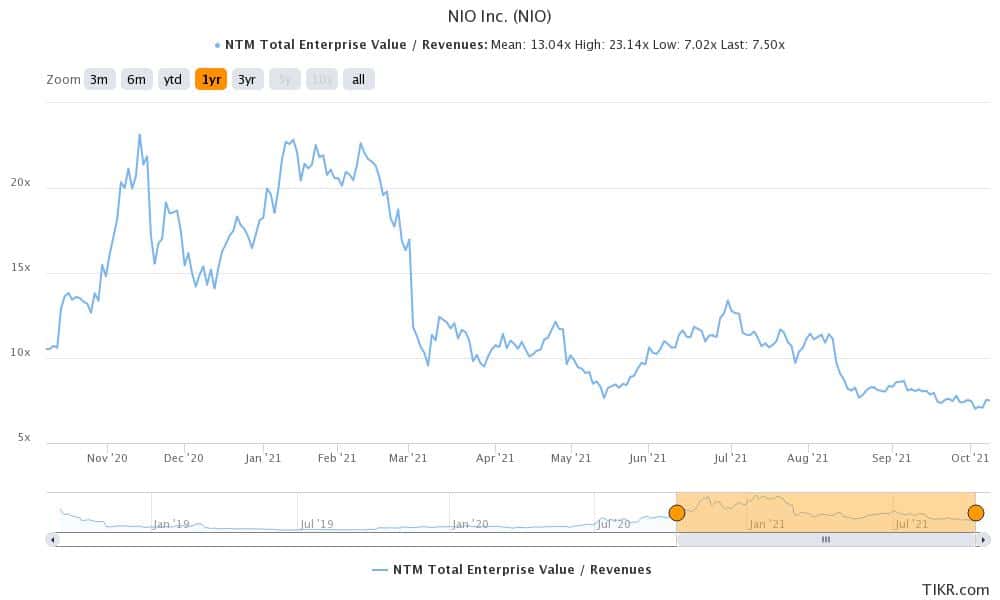 Goldman Sachs is bullish on NIO due to its premium brand positioning, upcoming ET7 sedan model, and battery-as-a-service proposition. Commenting on the ET7, Fei Fang, analyst at Goldman Sachs, said: “The price makes the ET7 the most expensive car model in China ever launched by domestic manufacturers, thus reinforcing the value of the Nio brand in the market. premium space.

NIO’s high-end brand positioning makes it a differentiated Chinese electric vehicle stock to buy. The company also has the tacit backing of the government and it bailed out the company last year as it faced a battle for survival. China has also created a category of grants for companies that provide battery replacement service where only NIO is eligible. By providing battery replacement service, NIO is able to reduce the initial cost of the vehicle as the buyer can purchase the car without the battery.

The performance of the company has also improved over the past year and after posting negative gross margins, it is now posting double-digit gross margins.

As NIO further increases its deliveries and enters more and more international markets after Norway, its sales are expected to increase by several times over the next decade. Wall Street analysts are also bullish on NIO and its median target price of $ 59.20 is a 65% premium over current prices. Valuations for the stock look reasonable and the current NTM EV / sell multiple of 7.5x is almost the lowest we’ve seen in the past year.

Arrival is a British electric vehicle start-up that went public through a reverse merger with CIIG Merger Corp. The stock has looked weak since the merger amid the wider sale of growth names. Arrival is currently a pre-revenue company and analysts expect it to post revenue of $ 595 million in 2021. The company is targeting the commercial electric vehicle market and is said to compete with Rivian, which is backed by Amazon. 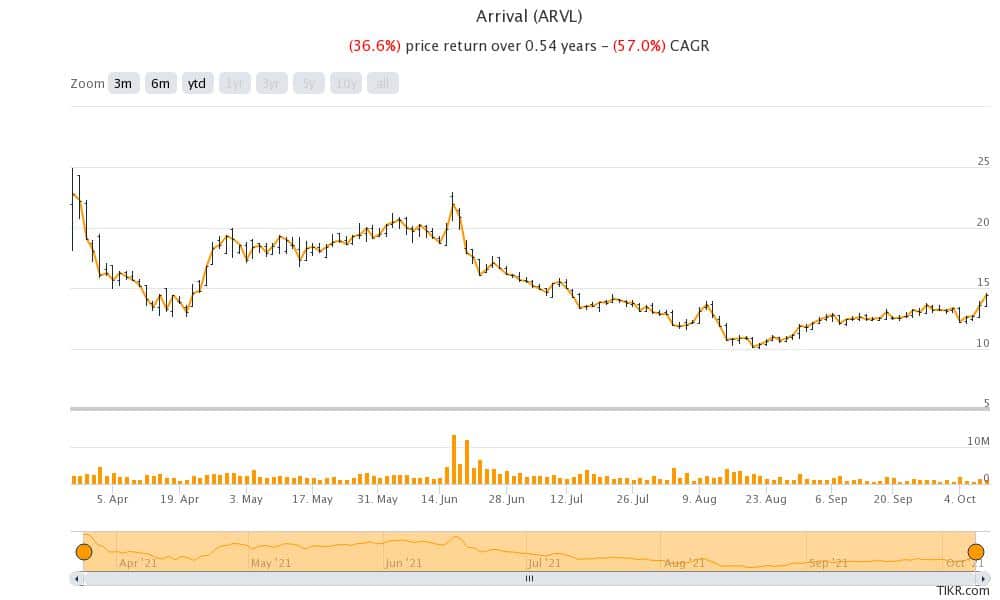 Of the four analysts polled by CNN Business, three rate ARVL as a buy while one analyst has a pending rating. Its median target price of $ 23.92 is a 65% premium over current prices. When presenting the merger, Arrival said it expects to post revenue of $ 14.1 billion in 2024. The company’s current market capitalization is around $ 9 billion, which gives us a 2024 price / sales multiple of only around 0.63x. The multiples look attractive enough if the company can keep its forecast.

Overall, ARVL looks like a good stock of EVs to buy in the commercial EV market. As companies around the world convert their fleets to zero-emission vehicles, companies like Arrival could benefit. 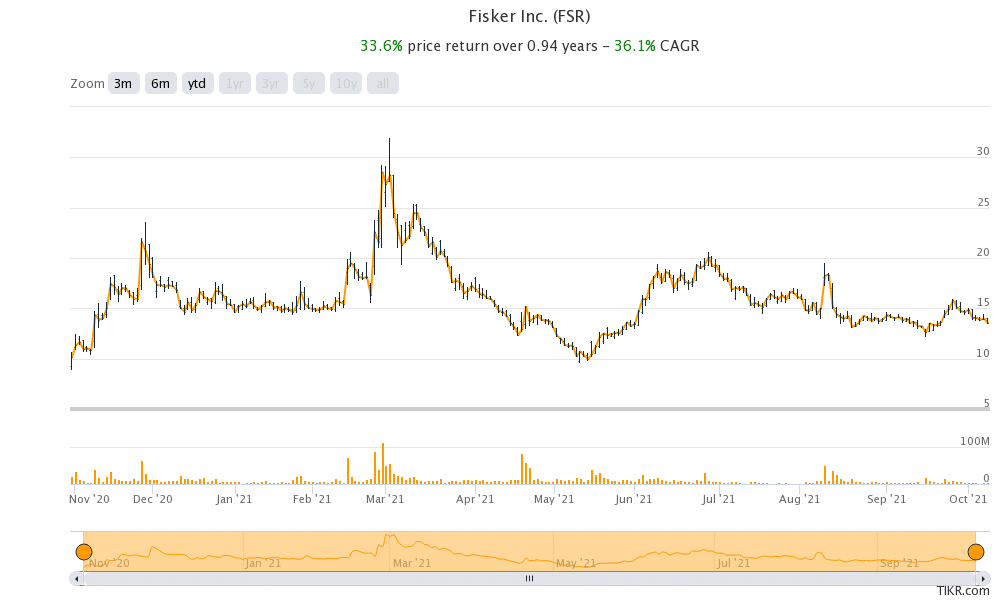 FSR is one of the cheapest electric vehicle stocks

With a market capitalization of just around $ 4 billion, FSR is among the cheapest electric vehicle stocks on the market. Unlike Tesla, which sets up its own Gigafactories to produce cars, FSR has opted for links with third parties. The company plans to start production of its first vehicle, the Ocean SUV in Europe next year. He partnered with Magna to produce the vehicle.

For its second vehicle named Project Pear, Fisker partnered with Foxconn to produce the vehicle. The company has competitively priced its vehicles and may be fighting an uphill battle with other electric vehicle manufacturers. Fisker has a clean state unlike some of the other EV startup companies like Lordstown and Nikola, which makes it a good bet to play in the EV startup space. 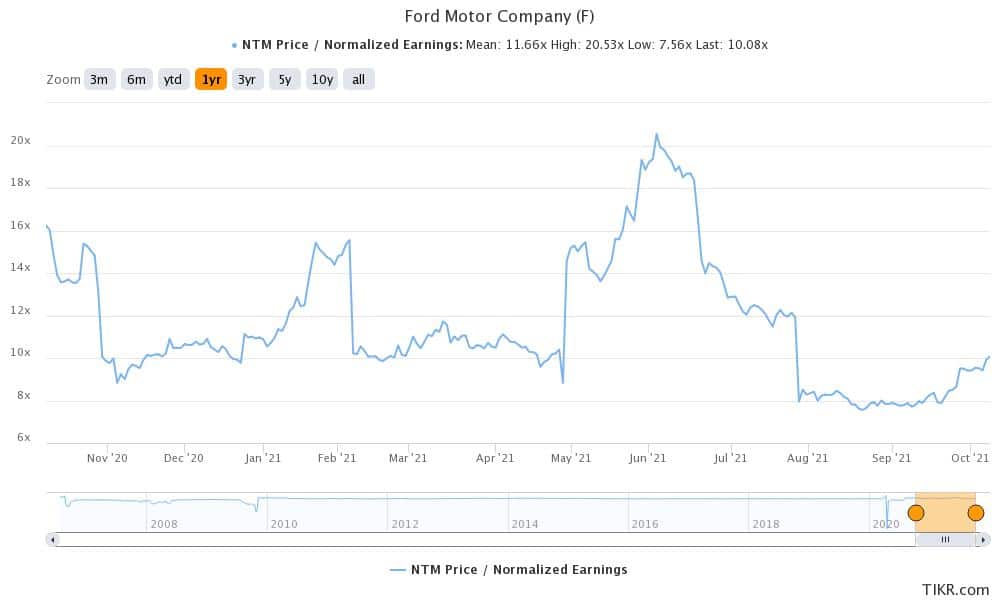 Under the leadership of CEO Jim Farley, the company has aggressively shifted towards zero-emission cars. Although the company has yet to set a deadline for selling ICE (internal combustion engine) cars in the United States like General Motors, it has said that by 2030 it will only sell electric vehicles in Europe.

Ford is a good stock of electric vehicles to buy

Ford said last month that with SK Innovation it would invest $ 11.4 billion in electric vehicle and battery factories. In particular, the battery is the most important material element of an electric car. Longer battery life helps resolve range anxiety and also acts as a competitive advantage.

Ford has already launched all-electric models of several of its best-selling models and next year we will have the all-electric model F-150. The ICE version of the F-150 has been the best-selling pickup in the United States for more than three decades. The model will compete with Lordstown’s Endurance pickup and Tesla’s Cybertruck. Meanwhile, Cybertruck’s launch has been delayed due to supply chain issues.

With an NTM PE multiple of only around 10x, Ford is among the best electric vehicle stocks to buy and is betting on a zero-emission future for the auto industry.

Mohit Oberoi is a freelance financial writer based in India. He completed his MBA with a specialization in finance and also holds a CFA charter. He has over 14 years of experience in the financial markets. He has written extensively on world markets over the past seven years and has written over 7,500 articles. It covers metals, electric vehicles, asset managers, technology stocks and other macroeconomic news. He also enjoys writing on personal finance and valuation related topics.